What’s Wrong with this Generation? 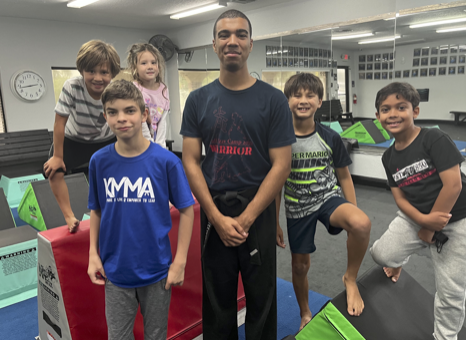 We hear a lot of this these days…

I’ve even been guilty of it; and perhaps you have too.

It’s not that there isn’t truth to it.

There are many undesirable traits that have manifested more and more over time, and even a few original ones, it seems, today.

Having said this, why is it that we so often put the focus on what’s wrong instead of what’s right?

Just as I am sure that I am not the only person who has complained about some things that seem prevalent in many Millennials, and now “generation Z”…

I am also sure that I’m not the only one with some of those, close around me, that are not only undeserving of ridicule but, furthermore, quite worthy of legit praise.

In this blog, I would like to write about two of these young men who are important members of my Team and my family- Shihan Harley and Sensei Charlie.

Shihan Harley is a Master Instructor of KMMA, my senior student, and also happens to be my son.

He is the pinnacle of what a young man should be and, sometimes, my heart swells with gratitude and pride.

He is kind and considerate, a great teacher, a great son, a great student and a great friend.

He exudes the Blackbelt Superpowers of Focus, Respect, Discipline, Confidence, Gratitude and Vision.

He exhibits a maturity, wisdom and leadership well beyond his years, and a work ethic beyond reproach.

He is way better than I was at his age and, quite frankly, if we were comparing the two generations based on just the two of us, there’s no doubt that Gen Z wins.

he did literally grow up at Krav Maga Martial Arts.

That’s less true of Sensei Charlie, he’s only been with us four or five years now, but he too is a great Blackbelt and impeccable example of what we mean when we talk about Blackbelt Leadership Excellence.

He is confident and competent, hungry and honeable, a joy to be around and also has a work ethic beyond reproach.

Sensei Charlie is a young instructor and coming up under tutelage of Shihan Harley and the great Sensei Thomas, as well as I.

We are proud of and grateful of him too, another champion of the next generation.

In closing, let me say, this is why I do what I do.

Instead of focusing and complaining about everything wrong in the world today, I get to enjoy working with these young leaders and, with their help, bring up the next generation of leaders too.

Be A Superhero 2 Week Tryout!

AND/OR COME TRAIN WITH ME!!!

TampaKravMaga.com and Krav Maga Martial Arts have been empowering lives through the martial arts in the Tampa Bay area for over 20 years!