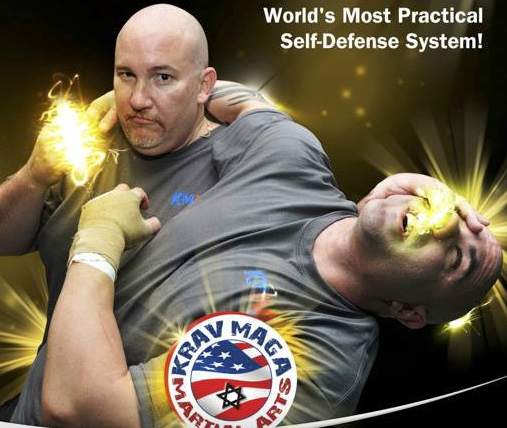 Certainly one of the main reasons that many people start a martial arts program is to learn to defend themselves, and that’s a good reason.

I was just having a discussion with a student of mine that is also a Veteran Army paratrooper and is now a government contractor, still doing a lot of the same work he used to do; in fact he’s deploying back to Iraq in 21 days.

He mentioned to me that he’d come to my dojo for the real world self defense of krav maga, saying he’d done the research and wanted to know that he was learning something that would be effective in real world combat.

He went on to acknowledge that he’d discovered that what we do is so much more, and that he’s been grateful to apply the leadership and other lessons he’s learned at my dojo in his Army missions as well.

He presented me with an amazing gift at my Blackbelt Leadership seminar the other day by the way- a flag he flew over Iraq on a mission there, along with a certificate and words of recognition/gratitude for the impact my mentorship has made in his life.

Extremely meaningful moment for me, but I digress……

The real point is that Imran, the student in the story, got me thinking about the mission of my dojo, and specifically as relates to self defense.

As I share this message with you, let me begin with these two points:

1. While we do teach the most practical self defense system in the world, I don’t consider it the most important thing we teach. God willing, a student will never have to apply the physical self defense techniques; if they do, things have already gone bad. So, whereas I pray they don’t get to use that part of what I teach, I know that they will use the rest of what they learn at my dojo every single day- for success in business, school, relationships and life.

2. While I pray that none of my students ever have to use the practical and effective self defense system that we teach (which includes defense versus sticks, knives and guns in addition to punches, kicks and grabs and holds standing and from the ground); the only thing worse would be for a student to need to defend themselves and to not be able.

It’s better to have and not need than to need and not have.

This principle is true in many situations, and definitely as applies to self defense.

I’d like to continue by sharing some points about what self defense includes though.

While the “self defense” that I alluded to in point two above referred the physical self defense technique against an active attack of real world violence, I believe that it actually includes much more.

After all, the intent of our real world self defense system is to get home safe.

So shouldn’t this include defending ourselves against all threats that would harm us?

So I am expanding the definition for our purposes to include not only defense against acts of violence but also:

We must be deliberate about what we read, hear, watch and who we associate with to defend ourselves against mental and emotional threats even more insidious than those to the body, including negativity, depression, distraction and other conditions that hamper our ability to be our best.

As I alluded to earlier, though, this does not mean we should not be ready.

We pray for the best and prepare for the worst.

So here are some of the ways we should prepare to avoid or mitigate against acts of violence.

1. Awareness is key. While we train students to be able to react under worst case scenarios of surprise and stress, the best defense is to be aware of the possibility of danger before it happens and steer clear of it.

2. The way you present yourself is also key.

We should portray Confidence, but not arrogance; kindness and strength.

3. Also relevant to the top three bullets above- reference our physical, mental and emotional well being- who we associate with will also determine the probability of us ending up in a tight spot. Of course this is true of our success habits or lack thereof as well.

The law of association says that we become like the people we associate with.

As you can see, I hope, this affects all of the elements of self defense I have discussed including the possibility of being in the wrong place at the wrong time with the wrong people and therefore with more likelihood that violence will erupt.

4. It is also possible to de-escalate situations and/or disengage from a dangerous situation before one has to hurt someone or run the risk of being hurt. Nobody ultimately wins in this situation.

5. Having said this, one can do everything right and still end up the potential victim of violence. In the case where violence is imminent or the attack is already upon us, it is then imperative that we have been trained and prepared ahead of time to survive violence.

This too involves physical, mental and emotional training and the self defense tactics and techniques must have been rehearsed to the point that the student is prepared to defend instinctively, and with no fear or hesitation at all.

This is the worst case scenario, but an important one.

Once the enemy has appeared before us with the intent to do harm, it is then our duty and responsibility to defend ourselves and those that we love.

But this is not the time to prepare for it; that must have happened beforehand.

Pray for the best and train for the worst,