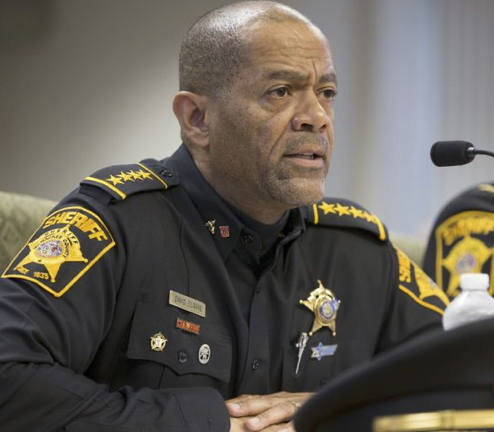 I usually write about someone specifically in our community, but this man’s words are so spot on in this quote, that I had to share them and Winner Wednesday seemed as good a time as any.

The Blackbelt Leader Foundational Superpowers that I teach in my school and explain in my book are: FOCUS, RESPECT, DISCIPLINE, CONFIDENCE, GRATITUDE AND VISION.

While Sheriff Clarke really illuminates the deficiency of Respect today, I feel that his words speak to the rarity of all of them.

It’s one of the reasons I coined these essential attributes “superpowers”- not everyone has them, but those that do and wield them properly accomplish superhuman things, for themselves and for humanity.

“It’s not the police who need to be retrained, it’s the public. We have grown into a mouthy, mobile phone wielding, vulgar, uncivil society with no personal responsibility and the attitude of ‘it’s the other person’s fault, you owe me’. A society where children grow up with no boundaries or knowledge or concern for civil society and personal responsibility.
When an officer says “Put your hands up,” then put your hands up! Don’t reach for something in your pocket, your lap, your seat. There’s plenty of reason for a police officer to feel threatened, there have been multiple assaults and ambushes on police officers lately. Comply with requests from the officer, have your day in court. Don’t mouth off, or fight, or refuse to comply… that escalates the situation.
Police officers are our sons and daughters, fathers and mothers, brothers and sisters. They’re black, white, brown, all colors, all ethnicities, all faiths, male and female, they are us. They see the worst side of humanity… the raped children, the bloody mangled bodies of traffic victims, the bruised and battered victims of domestic violence, homicide victims, body parts… day after day.
They work holidays while we have festive meals with our families. They miss school events with their kids, birthdays, anniversaries, all those special occasions that we take for granted. They work in all types of weather, under dangerous conditions, for relatively low pay.
They have extensive training, but they are human. When there are numerous attacks on them, they become hyper vigilant for a reason, they have become targets. When a police officer encounters any person… any person, whether at a traffic stop, a street confrontation, an arrest, whatever… that situation has the potential to become life threatening. You, Mr & Mrs/Miss Civilian, also have the responsibility of keeping the situation from getting out of control.
Many law enforcement officers are Veterans. They’ve been in service to this nation most of their lives, whether on the battlefield or protecting us here at home. They are the only thing that stands between us and anarchy in the streets.
If you want to protect your child, teach them respect.”
~ Sheriff David Clarke