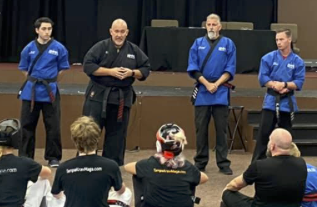 Last week I was sitting with a father renewing he and his son to our Blackbelt Leadership Training program. He and his son had set the goal to become Blackbelt Leaders and were ready to take their next step. Dad shared a secret with me, informing me that his son had severe ADHD and some other challenges that had made him unsure if he would stick to training. He told me that he had often begun things that he was initially excited about but that usually something would happen that would make him shutdown and then not want to come any more.

Then he hit upon the secret sauce that makes KMMA unique: he said of his son’s interactions with my Team, “he always leaves so encouraged, inspired and empowered”. “It’s different than anything we’ve ever experienced before”.

Krav Maga Martial Arts teaches the most practical self defense system in the world; we develop Focus, Respect, Discipline, Confidence, Gratitude and Vision. Students become more fit and develop grit, perseverance and other success skills that help them accomplish their goals.

All of this and more is part of the Blackbelt Leadership Success system to Blackbelt and beyond.

But there is a secret sauce that makes my KMMA Blackbelt Leaders do it better than anyone else anywhere else and I say this proudly and confidently.

The secret sauce is this: we use positive reinforcement, encouragement and empowerment to help the student become who they may be. We see them not as they are, but as they can be, and then build on their strengths and help them overcome their challenges. We train them to become the best and highest versions of themselves, and we do so in a special way that makes them believe in themselves and see the future for themselves that we see in them; and then we empower them with the attributes and leadership skills to help them realize the Vision they create.

I share this secret with you for a few reasons:

All leaders (teachers, parents and other coaches/examples) would do well to embrace the same process. Meet the student where they are at, and then lead them to where they ultimately want to go (even in the case where they don’t realize it yet).

The amazing result is a confident and competent leader that not only is prepared to live and empowered to lead in their own life, but also to help lead other future leaders to the same.

Prepare To Live; Empower To Lead!

The KMMA Superhero Team is available today! 813-948-4844 to schedule your free provate intro & orientation with a KMMA Blackbelt Superhero!