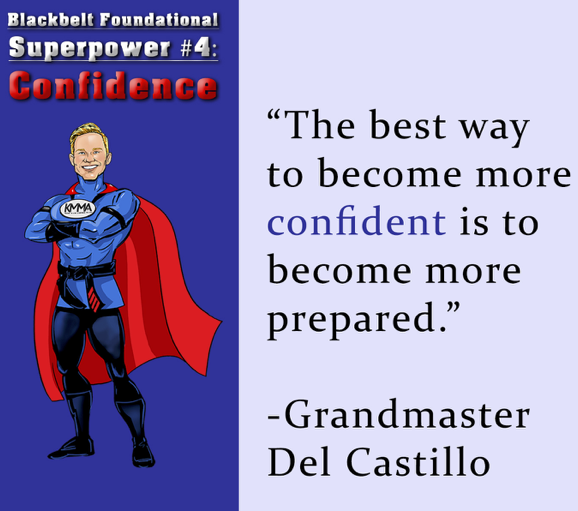 Today we get to talk about one of my favorite Blackbelt Leadership Superpowers- Confidence!

I agree! Confidence, or the lack thereof, is one of the prime indicators of the degree of success that one will achieve in any pursuit.

I LOVE teaching Confidence because it is so fun to watch a young (or not so young), shy and/or not confident person develop it, and then apply it to winning in the martial arts and in life!

Enjoy today’s excerpt from my book, and take this Confidence challenge from me today:

If you’re not yet a student or have a child you’d like us to develop Confidence in, pick up the phone and call us, or visit us online at TampaKravMaga.com

And if you are a student, think about who you know that could benefit increased Confidence and the other Blackbelt Leadership Superpowers and invite them to try a class with you.

Prepare To Live; Empower To Lead!

Focus your ears, because I got a very important lesson for you today. In my new book, which is really, really right about to be published, I’ve started calling our foundational Blackbelt attributes Superpowers, because I really think that they are. I’m going to talk to you more about those superpowers, all of them, that we want you to develop first on the way to becoming a Blackbelt.  The one specifically that we’re going to talk about today is confidence. And confidence is one of my favorite, favorite superpowers, because confidence is one that puts fuel and power into all the rest. You can honestly have several of the other superpowers or just things that you’re great at, but because of a lack of confidence, not be able to share those gifts with the world.

One of the first things that we try to develop in our future Blackbelt leaders is confidence. But confidence is actually a form of something that I’ve been teaching a lot on lately, I’ve been writing on, and talking about trust.  The team and I are reading a great book, which I recommend everybody to read, it’s by Dr. Stephen Covey’s son, Stephen M.R. Covey. And the book is called The Speed of Trust. In fact, everything I’m about to share with you I took from that book (in all transparency, but I’m sure that Stephen Covey’s very, very happy that I’m sharing it with you today).

So… trust; and when we talk about trust, what’s the more common theme? Usually when we think about trust, we think about whether we trust somebody.  In reality though, there are two important parts in trust, just like there are two important parts in confidence:  trust in others and trust in ourselves.  How do we gain trust? What is the thing that causes us to trust somebody, including ourselves? It’s another C-word, and the word is credibility.

The second part is competence.  Character involves a lot of the other things that we teach here, what we call the principles of the Blackbelt (courtesy, modesty, integrity, perseverance, self-control, and the indomitable spirit). Our Blackbelts develop these traits on the way to becoming Blackbelts:  that’s character. But even if one of my Blackbelts became a sensei and had all of those things, would you trust them to teach you if their martial arts sucked?  No, you wouldn’t.  If they couldn’t perform good martial arts, if they couldn’t teach in a way that caused you to learn good martial arts, you wouldn’t want to learn from them. For example, who would trust me to perform surgery on you or a loved one? No one, I hope. Because that’s an area where I do not have competence. I haven’t been to medical school, I’m not a doctor.

So then, we need both character and competence. To delve deeper into character, there are two cores that create character, and these two are I’s:  integrity and intent.

Another definition (from the Army days, many, many years ago) is “meaning what we say what saying what we mean”.  Both are equally important.  When most people think integrity, again, they’re thinking about the one that I say what I mean. They’re thinking the one that I don’t lie, that I don’t cheat, I don’t steal. And all those things are important. But do I follow through on the things that I say I will do? That’s integrity too. And by the way, when you were shaking your head, you were thinking about yourself, probably. And that’s okay because everybody, in truth, feels that sometimes; but that’s the point.  See, in order to trust yourself, you have to develop integrity with yourself. And the way we develop integrity with ourselves is when we say, “I will do whatever the thing is.” You have to do it. At least you have to do it more times than you don’t. Because if you tell yourself, “I’m going to get up at six o’clock in the morning to exercise,” or “to read” or “to… whatever” and one day you hit the clock and you don’t get up. And then the next day you hit the clock and you don’t get up. And the next day you hit … You know what you will eventually tell yourself? You will tell yourself, “Why am I setting this clock? I’m obviously not going to get up.” You’ve lost integrity with yourself. So keep this in mind because it’s so important.  Here we teach people how to have integrity in that way too. I don’t think we talk about it enough, but we believe “Quitters never win and winners never quit.” Everybody that’s wearing this blue top made a commitment to become a Blackbelt leader one day. You signed something saying … And I’m not challenging your integrity, I believe all of you are going to do it, by the way to be clear. But I’m saying, if you don’t, you’ve just broken integrity to yourself and to me and to everybody else that’s helping you. Because that’s what integrity means, is that we do what we say we’re going to do. Oss?

The first one is abilities (we already talked about that one).  Every martial arts instructor must be a great martial artist first. You have to actually have the abilities. You have to have the fruit on the tree. But even that is not really enough to create trust, at least the ultimate trust.

This last one, I think you need … I believe that this is the one that begets trust more than any other thing:  results.  In other other words, here’s the example.  There’s a sign in the dojo that says, “This is a Blackbelt school.”  This is a Blackbelt school. If we say, “This is a Blackbelt school,” and we don’t produce Blackbelts or we don’t produce good Blackbelts, are we really a Blackbelt school?   No.  True story:  back when I opened the school in October of 2000, I already had a specific model in my mind of the psychology of the way we would teach. A gentleman that ran a different school (he was a competitor), he came into my school one day and had some words to say because I was talking about positive reinforcement, building the student from the inside out, creating trust first.  He said, “You can do all that stuff if you want, but you’ll never produce a good Blackbelt.”

The point of the story, the reason I share the story, is because back then it was just my word against his. There was no reason for anybody to trust that what I believed was true, other than my word. But when we started producing the best Blackbelts anywhere, who were not only the best Blackbelts in mind and spirit and character and integrity and courtesy and modesty and all the things, but were physically superior to the schools that didn’t teach that way. Now, no one challenges my methods.

Let’s bring it closer to home. When you get to know Shihan Harley Del Castillo (my son),  Sensei Church, Sensei Bierly, and Shihan Borton or any of the rest of the KMMA Sensei, don’t you feel like, “Wow, I can not wait to be like that one day.”  That’s trust. And it’s trust because of what? The results!  All the other things too, of course, but the results are the clincher. Every Blackbelt leader is a testament and proof of the results of the system.