Discipline is the 3rd of the Blackbelt Superpowers that I teach about in my book, and develop in students through my Blackbelt Leadership Program at KMMA. It is the bridge between goals and accomplishment, and one of the most important virtues towards the end of empowering the rest.

Any way, it seems our friends at Daily Stoic, and specifically Ryan Holiday, have written a book on the subject.

I haven’t read the book yet, so I can’t reccomend it until I do, but I can share the blog below that Blackbelt Leadership student and retired Urological Surgeon Michael Reisman shared with me.

I did enjoy it, and I hope you do too.

We have known forever: to master anything, one must first master oneself—one’s emotions, one’s thoughts, one’s actions.

From Aristotle to Heraclitus, St. Thomas Aquinas to the Stoics, from The Iliad to the Bible, in Buddhism, in Confucianism, in Islam—the ancients had many words and many symbols for this timeless law of the universe:

Whatever the language, it’s all a way to spell D-I-S-C-I-P-L-I-N-E. Seneca tried to instill it in the rulers he advised—that “most powerful is he who has himself in his own power.” Marcus Aurelius said, “love the discipline you know, and let it support you.” Cicero called the virtue of temperance the polish of life. Discipline, it’s the thing that makes it possible to achieve greatness as well as bring greatness to whatever it is that you do, however humbly.

That’s why the Stoics said that discipline is the most important virtue. Without it, without self-control, without boundaries—we risk not only failing to meet our full potential and jeopardizing what we have achieved, but we ensure misery and shame.

And what was true in 300 BC is only truer today. In a world of far more temptation and excess, this ancient idea—the second of the cardinal virtues—is more urgent than ever.

And if you’ll allow me, discipline is also what’s allowed this email to work, which I have written every day, without fail, since the summer of 2016. Almost every single one of these emails has been written in the third person but there is a person behind these emails: me. Ryan Holiday.

It’s been my honor and my daily discipline (it’s taken a lot, let me tell you) to write these notes to you each morning. If you have gotten anything out of them—if you enjoy my writing at all—I’d love for you to consider preordering my new book, Discipline is Destiny: The Power of Self-Control.

Preordering makes a huge difference for authors (and bookstores) as they try to get a book off the ground. So it’d mean so much if you could support this book. To make it worth your while, I put together a bunch of awesome bonuses, including signed pages from the drafts of the book as I wrote them, as well as two full bonus chapters, and the Spotify playlist I used while writing the book.

Discipline is Destiny officially releases on 9/27, but it’s already gotten some rave reviews. Admiral James Stavridis called it “a powerful case for the virtues and values that leaders must live by in the modern world.” The poker champion turned bestselling author Annie Duke said the book is, “a brisk and absorbing read.” And Steven Pressfield said “I read the whole thing straight through and it is really terrific. I can’t recommend it highly enough, particularly the last chapter. So read to the very, very end.”

So if you’re willing to take their word for it, please go preorder Discipline is Destiny right now! 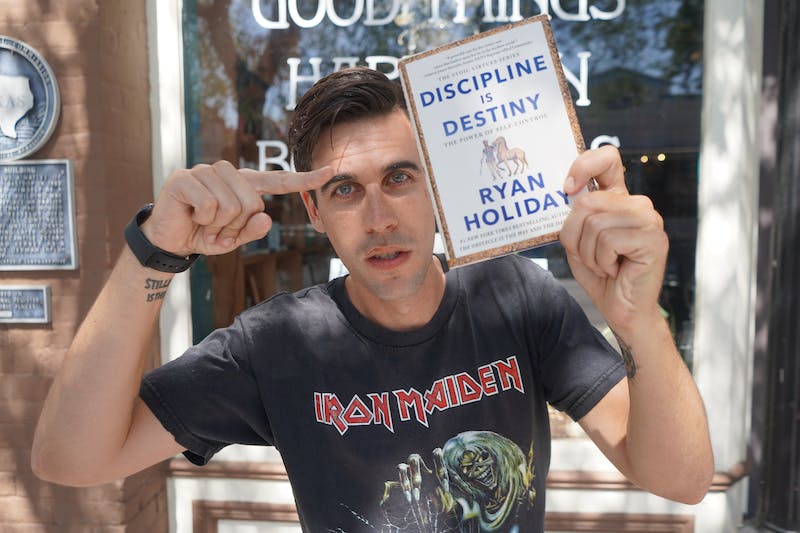 Click here for signed copies of Discipline is Destiny: The Power of Self-Control by Ryan Holiday

The bonuses do apply to purchases of Discipline is Destiny in any format from any retailer in any country. If you preorder copies from anywhere other than the Daily Stoic, just send your receipts to disciplineisdestiny@gmail.com and we’ll make sure you get the bonuses!

View This Email in URL

About Grandmaster Stephen J. Del Castillo: Grandmaster Del Castillo is the founding Master Instructor of Krav Maga Martial Arts and has been empowering lives in Pasco and Hillsborough Counties since October of 2000. He is a 7th degree Blackbelt, MBA, author, mentor and success coach, a US Army Veteran and a proud father and grandfather. He is married to Ms. Barbara Del Castillo who helps him run the school. Grand Master Del Castillo began his training in the early 80’s and has high level blackbelts in Tae Kwon Do, Karate, Premier Martial Arts and Krav Maga Martial Arts as well as experience in kickboxing, Jeet Kune Do and Jiujitsu. He has high level instructor certifications from BBSI, IKMF, and KMG and has been featured in numerous Martial Arts publications and also Success magazine. He was a competitive sport karate and American Kickboxing instructor until he enlisted in the US Army where he served in the 82nd Airborne Division, where he won an Army Green to Gold scholarship and proceeded to ROTC and the University of Tampa. He was commissioned in 1992 and went on to serve in Germany with the 3rd Infantry Division and then in several other posts in the US until he left military service to pursue his dream of creating KMMA in 2000.

See stephendelcastillo.com for more information and to order my book, Developing Your Superpower, Meditations on Mastery, Volume 1.